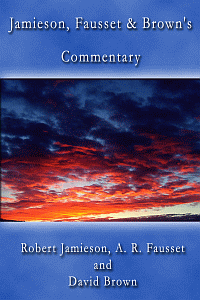 Originally published in 1871, The Commentary on the Whole Bible is to verse-to-verse exposition what Matthew Henry's Complete Commentary is to devotional-style commentaries. It illuminates the full meanings and implications of words, phrases, verses and passages to supply you with an in-depth understanding of the entire Bible.

Robert Jamieson (1802-1880) was educated at Edinburgh University with the intention of of studying for the medical profession. Before he had completed his course, however, he decided to devote himself to the ministry. For that purpose he entered the Divinity Hall and was licensed as a preacher in 1827. Two years later he was presented by George IV to the parish of Weststruther, in the presbytery of Lander. There he remained until 1837, when he was transferred to the church of Currie, in the presbytery of Edinburgh. In 1844 Jamieson was appointed minister of Glasgow and in 1848 the University of Glasgow conferred the degree of Doctor of Divinity upon him.

The principal works of Jamieson were: Eastern Manners Illustrative of the Old and New Testaments; Manners and Trials of the Primitive Christians; Commentary on the Bible in conjunction with Edward Henry Bickersteth; Commentary Critical and Explanatory on the Whole Bible (1871), with A. R. Fausset and David Brown.

In theology he belonged to the Evangelical school of the Church of England. He has written Scripture and the Prayer Book in Harmony; Horse Psalmiece; The Englishman's Critical and Expository Cyclopedia; The Church and World; The Millennium; The Signs of the Times; Prophecy a Sure Light; The Latter Rain ; True Science Confirming Genesis; The Personal Antichrist; Spiritualism; Critical and Expository Commentary on the Book of Judges; and Guide to the Study of the Book of Common Prayer. He edited various classical authors as well as the English translation of J. A. Bengel's Gnomon Novi Testamenti, and A. R. Vinet's Homiletique, and wrote the second and fourth volumes of The Critical and Explanatory Pocket Bible, and the third, fourth and sixth volumes of the Critical, Explanitory, and Practical Commentary.

David Brown(1803-1897)was born at Aberdeen Aug. 17, 1803 and died there July 3, 1897. He studied at the University of Aberdeen; was licensed in 1826; was ordained minister of a country chapel in 1836; he went with the Free Church 1843, and the same year became minister of St. James, Glasgow; and was elected professor of apologetics, church history, and exegesis of the Gospels at the Free Church College, Aberdeen, 1857; elected principal 1876, and resigned his professorship 1887.

He was a director of the National Bible Society of Scotland, one of the founders of the Evangelical Alliance, was deeply interested in the Alliance of the Reformed Churches and a member of the third General Council at Belfast, 1888. He was an opponent of Robertson Smith in the controversy which resulted in the dismissal of the latter from Aberdeen, and as a member of the New Testament revision company took a highly conservative position. He was moderator of the General Assembly of the Free Church in 1885.

Besides numerous contributions to the periodicals, he published Christ's Second Coming: Will it be Premillenial?; Crushed Hopes Crowned in Death; The Restoration of the Jews: the History, Principles, and Bearings of the Question; Life of the late John Duncan; The Apocalypse: Its Structure and Primary Predictions. He collaborated with R. Jamieson and A. R. Fausset in preparing the Commentary, Critical, Experimental, and Practical.

It contains so great a variety of information that if a man had no other exposition he would find himself at no great loss if possessed this and used it diligently. I have of it a very high opinion and I consult it continually.