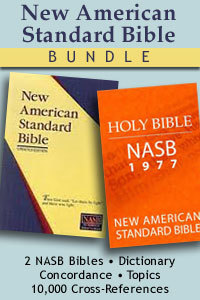 The NASB is 'my' Bible, the finest and clearest of translations for inductive study. You can be sure this is the translation I recommend above all others.

I believe the NASB is the most accurate translation thus far. It's my Bible of choice, and I highly recommend it for all pastors and seminary Bible students.

This work by an outstanding team of biblical scholars is perhaps the most accurate and reliable translation presently available.