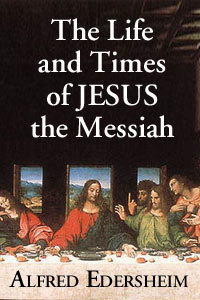 First published in the 1880's, The Life and Times of Jesus the Messiah is one of the best known and most important references on the life of Christ ever written, This classic work brings to life the streets, the marketplaces, the religious conflicts, the people, and the places of Jesus' earthly ministry.

The Life and Times of Jesus the Messiah is divided into five books:

Some of Alfred Edersheim's most widely read works are: Bible History Old Testament, Sketches of Jewish Social Life and The Temple: Its Ministry and Services.

The most important general work on the life of Christ in our language.

The classic work to which all modern treatments are indebted. No pastor should be without this magisterial work.

As for books on the life of Christ. Alfred Edersheim stands at the head of the line.

A scholarly work full of helpful matter and especially valuable because of the author;s knowledge of Jewish lore and customs.