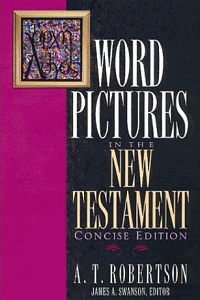 Word Pictures in the New Testament was originally published as a six volume set between 1930 and 1933.In this 6 volume set, Robertson analyzes a key word or phrase from almost every passage of the New Testament, stressing those meaningful and pictorial nuances often implicit in the original Greek, but lost in translation. Not only does he cover syntax, but he gives background information such as where else each word appears, as well as the connotations of the original Greek.

Robertson was the premier New Testament scholar of his generation. A voluminous writer, Robertson published forty-five books including Harmony of the Gospels, Grammar of Greek New Testament in the Light of Historical Research, An Introduction to the Textual Criticism of the New Testament and Word Pictures in the New Testament. This body of literature reflects a general bent toward language study over theological reflection. His work A Grammar of the Greek New Testament in the Light of Historical Research, published in 1914, was the capstone of his career. It drew accolades from all corners of the globe and was used by diverse figures in their work including Robertsonï¿½s seminary contemporaries, professors in secular institutions, and the Pope.

A work of thorough scholarship stressing the meaningful and pictorial suggestions that are often implicit in the original text but lost in translation.