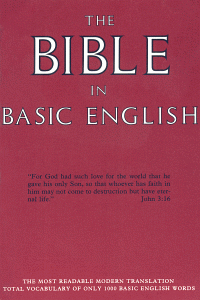 The Basic Bible, containing the Old and New Testaments in basic English, was first published in 1941 as the New Testament only. The Old Testament was later added to complete the Bible in 1965.

The form in which the Bible is given here is not simply another example of the Bible story put into present-day English. The language used is Basic English. Basic English, produced by Mr C. K. Ogden of the Orthological Institute, is a simple form of the English language which, with 850 words, is able to give the sense of anything which may be said in English. By the addition of 50 Special Bible words and the use of 100 words listed as giving most help in the reading of English verse, this number has been increased to 1000 for the purpose of putting the Bible into Basic.

Working with the Orthological Institute, a Committee under the direction of Professor S. H. Hooke, Professor Emeritus of Old Testament Studies in the University of London, has been responsible for a new English form of the Bible made from the Hebrew and the Greek. In this undertaking, the latest ideas and discoveries in connection with the work of putting the Bible into other languages were taken into account, and when the Basic form was complete it was gone over in detail by a Committee formed by the Syndics of the Cambridge University Press. The Basic Bible, which in this way was watched over by two separate groups of experts through its different stages, is designed to be used wherever the English language has taken root.