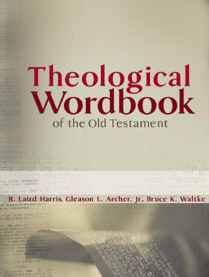 Theological Wordbook of the Old Testament follows a practical and less exhaustive viewpoint than the other major studies. The busy pastor or earnest Christian worker who has neither the time nor background for detailed technical study should yet have a tool for the study of the significant theological words of the Hebrew Bible. The editors are of the conviction that essential to the right understanding of the theological terms of the Old Testament is a belief in the Bible's truth. Spiritual things are "spiritually discerned" (1 Cor. 2:14). Therefore, about thirteen years ago, they enlisted the help of some forty evangelical scholars who would write essay definitions of the important theological terms in the Old Testament that would be helpful to their brothers in the work of interpreting Scripture.

Often it was not easy to decide which words would be defined, and of those, which ones would receive lengthy discussion. It was decided to include also the vocables not chosen for essay treatment and give them one-line definitions—usually following the lead of the long-time standard, Hebrew and English Lexicon of the Old Testament, by Francis Brown, S. R. Driver, and C. A. Briggs.

In order to make the material in the Wordbook more accessible, there is a numerical index which correlates the numbers of the Hebrew words as given in Strong's Exhaustive Concordance of the Bible with the numbers of the roots and derivatives as given in the Wordbook. A link to this index is displayed at the beginning of each article. If a word is being studied in any verse of the Old Testament, that word can easily be found in Strong and its Hebrew number noted. Then one may enter the index (TWx in the Lang section of the WORDsearch bookshelf), easily access the appropriate Strong's number, and follow the link to the desired TWOT number. For further details, consult the heading of the Index. The Strong numbers of names are normally omitted, but the Strong entries marked "Chaldee" (i.e. Aramaic) are listed.

Robert Laird Harris was born near Upper Makefield Township, Pennsylvania in 1911. He earned a B.S. from the University of Delaware, a Th.B. and a Th.M. from Westminster Theological Seminary, an A.M. from University of Pennsylvania , and a Ph.D. from Dropsie College.

He was part-time instructor in Hebrew at the University of Pennsylvania (1946-1947) and then taught for twenty years at Faith Theological Seminary (1937-1956). He resigned from that institution and he then helped found the Covenant Theological Seminary, where he was chairman of the Old Testament department until he retired in 1981. He taught as an adjunct professor of Old Testament at Knox Theological Seminary at its founding in 1989. He served as chairman of the Committee on Bible Translation for the New International Version. Harris passed away after his ninety-seventh birthday in 2008.

was born in 1916. He graduated in 1938 with a B.A. from Harvard University and received an LL.B. from Suffolk Law School in 1939, the same year he was admitted to the Massachusetts bar. In 1940 he received a masters degree and in 1944 he was awarded a Ph.D. at Harvard University in Classics. Finally he received his Bachelor of Divinity from Princeton Theological Seminary in 1945.

Archer served as an assistant pastor of Park Street Church in Boston from 1945 to 1948. He then became a Professor of Biblical Languages at Fuller Theological Seminary in Pasadena, California from 1948 to 1965. From 1965 to 1986 he served as a Professor of Old Testament and Semitics at Trinity Evangelical Divinity School, Deerfield, Illinois. He became an emeritus faculty member in 1989.

Archer served as one of the 50 original translators of the New American Stand Bible published in 1971. He also worked on the team which translated the New International Bible published in 1978. Archer published over a dozen books and was a well known Biblical inerrantist. He passed away in the spring of 2004.

Bruce K. Waltke was born in 1930 in New Jersey to parents in the Mennonite Brethren tradition. He received an A.B. from Houghton College, a Th.M. and Th.D. from Dallas Theological Seminary, and a Ph.D. from Harvard University. He has served as president of the Evangelical Theological Society, was on the translation committee of the New American Standard Bible and New International Version, and is an honorary member of the committee responsible for Today's New International Version.

His books include Intermediate Hebrew Grammar, Introduction to Biblical Hebrew Syntax, Finding the Will of God, Creation and Chaos and commentaries on Proverbs and Micah, which was a winner of the 2002 Gold Medallion Book Award. He was the Old Testament editor for the Expositor's Bible Commentary series, the New Geneva Study Bible, and the Spirit of the Reformation Study Bible. More recently, he wrote An Old Testament Theology: An Exegetical, Canonical, and Thematic Approach, which garnered an ECPA Christian Book Award in 2008.