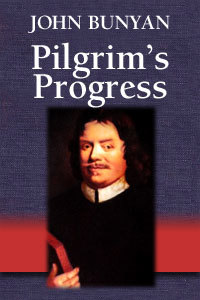 The Pilgrim's Progress has been printed, read and translated more often than any other book than the Bible. The most evangelical of classics, this book features John Bunyan's spiritual struggle as he found salvation in Christ and began to preach to groups of dissenters. People of all ages have found delight in the simple, earnest story of Christian, the Pilgrim, as he makes his way to the Celestial City.

John Bunyan (1628-1688), best known as the author of Pilgrim's Progress, was born at Elstow, near Bedford, in 1628. The Bunyan family had been settled in that country since the beginning of the thirteenth century. Thomas Bunyan, his father, was a 'brazier', or tinker, and John was brought up in his father's trade. But after his mother's death in 1644, he enlisted in the army; probably on the side of the Parliament, but as to this there is no direct evidence. In 1646, the army was disbanded; but before that Bunyan had passed through an experience which left a lasting mark on him. “When I was a soldier,” he says, “I with others were drawn out to go to such a place to besiege it; but when I was just ready to go one of the company desired to go in my room, to which when I had consented, he took my place; and coming to the siege, as he stood sentinel he was shot into the head with a musket bullet and died.”

Shortly after this Bunyan married, but nothing is known of his wife's family. With her, Bunyan talked of religion, and read in two books which he names: The Plain Man's Pathway to Heaven, by Arthur Dent (first published in 1601), and The Practice of Piety (1612). During the four years he went through a terrible spiritual struggle. In speaking of himself afterwards, he describes himself as the worst of sinners; in which he is known to have indulged is “swearing, lying, and blaspheming”, but from coarser vices he seems to have been free. The fury of his spiritual struggle, and the darkness of his own description of himself, both were due to the strength and depth of his own nature. At last it ended. Those who wish to know how Bunyan came to the light should read his own wonderful story of it.

In 1653, he joined Mr. Gifford's church in Bedford, which then worshiped in St. John's Church, and a year or two later he went to live in that town. He began about this time to preach, and so great was his success that he was set apart more especially for this work. At the Restoration (1660), the pastor of Bunyan's church was dead, and their building was taken from them and given back to the Established Church. On November 12, 1660, Bunyan was arrested for unlicensed preaching; and being again arrested in 1661, and refusing to abstain, he was kept in prison with only one short interval until 1672, when he was released at the Declaration of Indulgence. He spent his time in making many hundred gross of long tagg'd laces', and possibly in other work of the kind. He also preached, and now and again was allowed to go out and attend the meeting of his church, which meet in different houses as best it could. Bunyan wrote and published several books of meditations while in prison; one of which was the most remarkable auto biographies ever written, Grace Abounding to the Chief of Sinners. (1666)

In 1672, on his release, Bunyan was chosen minister of the community at Bedford with whom he worshiped, and a barn in Mill Lane was licensed for their meeting place. He seems to have been imprisoned again, in the winter of 1675-6, in the jail on Bedford bridge and there to have composed Pilgrim's Progress (published in 1678). The book at once leaped into fame; it has been republished scores of times, and translated into more than seventy languages. In 1685 the Second Part, dealing with Christiana and her family, was published. The year 1682 saw the issue of the Holy War made by Shaddai upon Diabolus. In 1688 he traveled to London, and there died and was buried in Bunhill Fields.

Of all Bunyan's books, only two are still commonly read, and these will be read as long as the memory of England survives: Pilgrim's Progress and the Holy War. Both are allegories, a droll composition as a rule; but these books are so true to human nature, so full of pictures of life and character, that children enjoy them as stories without understanding, while their elders admire them for other qualities as well.

Charles Spurgeon's favorite book, he read it over 100 times