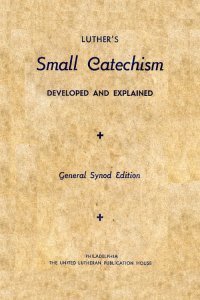 The term catechism comes from the Greek word kata-echo, which simply means "to repeat back." Dating back to the fourth century, Latin-speaking Christians used the word catechism to describe the basic instruction given to new Christians.

By the Middle Ages the term catechism had come to mean the three things that all Christians should know: the Ten Commandments, the Apostles' Creed, and the Lord's Prayer.