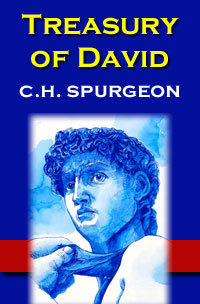 Look Inside
Treasury of David
Containing an Original Exposition on the Book of Psalms
By: Charles Haddon Spurgeon
Publisher: Wordsearch
Category: Commentaries

Charles Haddon Spurgeon, the "Prince of Preachers," composed and polished the Treasury of David over the span of nearly half his ministry. The classic commentary on the Psalms is a treasure for preachers and devotional readers alike! Spurgeon's verse by verse commentary, includes illuminating quotes from contemporaries and great Puritan expositors of the seventeenth and eighteenth centuries. Each Psalm closes with a short section of "Hints to Preachers."

About the Author
Few people in history can be known by one name and have it ring true with their audience, and Charles Haddon Spurgeon is one of them. Over time, Spurgeon , has become known and revered as the "Prince of Preachers". In the last 200 years he has been one of the most influential men for not only Preachers of the Gospel but for those who have not had the opportunity to hear and receive the Gospel message. He wrote tirelessly over his life, and Wordsearch Bible Software is committed to bring as many of Spurgeon's works as possible to you in electronic form.

The comments and expositions abound in rich, racy, and suggestive remarks, and they have a strong favour of the homiletic and practical exposition with which Mr. Spurgeon is accustomed to accompany his public reading of Holy Scripture. There is an intensity of belief, a fullness of assent to the great points of Calvinistic orthodoxy which our author would not be true to himself if he attempted to conceal.The brief introductions are very well done, and the abundant apparatus criticus the list of hundreds of writers on the Psalms, whose meditations have been laid under contribution to enrich the work, render this commentary one of the most voluminous in existence. At all events, the volumes will be an encyclopedia of reference.

The most important and practical work of the age of the Psalter is the Treasury of David by Charles H. Spurgeon. It is full of force and genius of this celebrated preacher, and rich in selections from the entire range of literature.

Mr Spurgeon's great work on the Psalms is without equal as an exposition from the entire range of literature."

A classic in its field. Richly rewarding, deeply devotional, and pleasingly relevant.