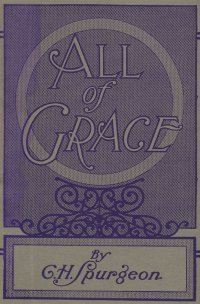 Look Inside
All of Grace
An Earnest Word with Those Who Are Seeking Salvation by the Lord Jesus Christ
By: Charles Haddon Spurgeon (Author)
Publisher: Wordsearch
Category: Literature, General

In this book, Charles Haddon Spurgeon, the Prince of Preachers, outlines a clear simple plan of salvation that anyone can understand and be drawn to God. Spurgeon's heartfelt goal in All of Grace is summed up in the final statement to the reader, "Meet me in heaven!"

Every word is weighted with precious truth, and truth so simply and convincingly put that none can fail affectionate desire to win for Christ and to Christ, make it a gospel treasury of priceless worth.