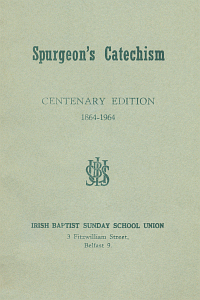 Charles Spurgeon felt a burning passion to compile a new Catechism that would establish a middle-ground between the "Personal Holiness" doctrine of Arminianism and the Hyper-Calvinistic "Predestination". The London Baptist Confession of 1689 and the Westminster Shorter Catechism had become unpopular to the people of the day.

"I am persuaded that the use of a good Catechism in all our families will be a great safeguard against the increasing errors of the times, and therefore I have compiled this little manual from the Westminster Assembly's and Baptist Catechisms, for the use of my own church and congregation. Those who use it in their families or classes must labor to explain the sense; but the words should be carefully learned by heart, for they will be understood better as years pass."

"May the Lord bless my dear friends and their families evermore, is the prayer of their loving Pastor."