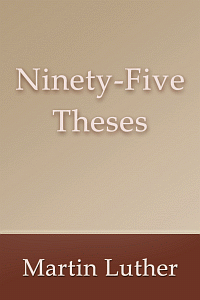 One of the most influential Church documents of all time. Nailed to the door of the Castle Church in Wittenburg, Germany on October 31, 1517, Luther's "Disputation on the Power and Efficacy of Indulgences" which resulted in his immediate excommunication from the Catholic Church.

Examine for yourself what has become the symbol of the Protestant Reformation.