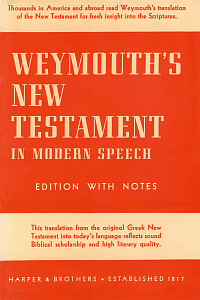 About the Author
Richard Francis Weymouth, noted linguist and New Testament scholar, was born in Devonport, England on October 26, 1822. He was the only son of Commander Richard Weymouth, and Ann Sprague-Weymouth. Richard Weymouth started his education at a private school in France. In 1843, he enrolled at University College, London, where he majored in classics. He received his B.A. in 1846, and his M.A. in 1849.

A most readable translation that combines a lucid style with grammatical accuracy. Old familiar phrases take on new significance.