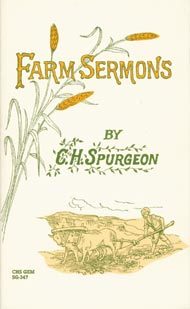 Along with illustrations, Farm Sermons contains nineteen great sermons which are based upon various things related to farming such as the Sluggard's Farm, the Broken Fence, Frost and Thaw, the Corn of Wheat, the Ploughman, Ploughing the Rock, The Parable of the Sower, The Principle Wheat, Spring in the Heart, Farm Labourers, What the Farm Labourers Can Do and What They Cannot Do, The Sheep before the Shearers, In the Hay-Field, The Joy of Harvest, Spiritual Gleaning, Mealtime in the Cornfields, The Loaded Waggon, Threshing and Wheat in the Barn.

Spurgeon was born and raised in the country, and loved it. While Farm Sermons was dedicated to and designed for reading by farmers, there are spiritual truths for all readers of this volume.