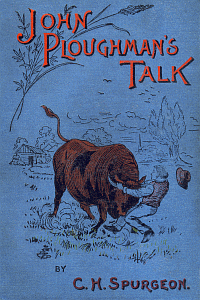 John Ploughman Talks is plain advice for plain people. Charles Spurgeon speaks candidly about such subjects as Idleness, Appearance, Gossips, Debt, Spending, Ignorant People and a host of others. This book features choice selections of the Prince of Preachers' humor, strong proverbial expressions and homespun phrases as well as much sound moral teaching.