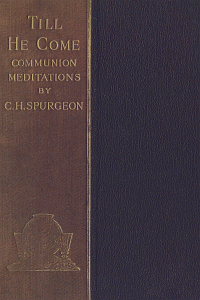 Come back to where it all started with the Prince of Preachers. When Charles Haddon Spurgeon spoke at communion meetings they were often times of great solemnity, and sometimes times of rejoicing, but always times when God's presence was at work in the hearts of the assembled congregation.

You too may have felt the thrill of God moving in your heart or had the experience of meeting with him at a time of worship. You can thrill to such times again as you read this collection of the addresses Spurgeon gave at the Lord's Supper.

Spurgeon was not only a great orator but he was also a man with a warm pastoral heart. To him the times together around the Lord's Table were times when both features of his ministry came together in rejoicing to urge the congregation to think once more about the great event they were celebrating. This comes through just as clearly to the reader today as it must have done to the hearer then. If you feel that you need to be re-grounded in the meaning of your faith then Till He Come will be a blessing to you.