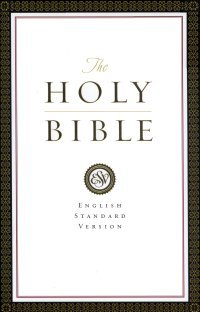 The English Standard Version is an "essentially literal" translation that seeks as far as possible to capture the precise wording of the original text and the personal style of each Bible writer. As such, its emphasis is on "word-for-word" correspondence, at the same time taking into account differences of grammar, syntax, and idiom between current literary English and the original languages. Thus it seeks to be transparent to the original text, letting the reader see as directly as possible the structure and meaning of the original.

The English Standard Version publishing team included more than a hundred people. The fourteen-member Translation Oversight Committee benefited from the work of fifty biblical experts serving as Translation Review Scholars and from the comments of the more than fifty members of the Advisory Council, all of which has been carried out under the auspices of the Good News Publishers Board of Directors. This hundred-member team, which shares a common commitment to the truth of God’s Word and to historic Christian orthodoxy, is international in scope and includes leaders in many denominations. The English Standard Version was published in 2001 as a revision of the 1971 edition of the Revised Standard Version

Every translation is at many points a trade-off between literal precision and read-ability, between "formal equivalence" in expression and "functional equivalence" in communication, and the English Standard Version is no exception. Within this framework we have sought to be "as literal as possible" while maintaining clarity of expression and literary excellence. Therefore, to the extent that plain English permits and the meaning in each case allows, we have sought to use the same English word for important recurring words in the original; and, as far as grammar and syntax allow, we have rendered Old Testament passages cited in the New in ways that show their correspondence. Thus in each of these areas, as well as throughout the Bible as a whole, we have sought to capture the echoes and overtones of meaning that are so abundantly present in the original texts. As an essentially literal translation, then, the English Standard Version seeks to carry over every possible nuance of meaning in the original words of Scripture into our own language. As such, it is ideally suited for in-depth study of the Bible. Indeed, with its emphasis on literary excellence, the English Standard Version is equally suited for public reading and preaching, for private reading and reflection, for both academic and devotional study, and for Scripture memorization.

The English Standard Version is based on the Masoretic text of the Hebrew Bible as found in Biblia Hebraica Stuttgartensia (2nd ed., 1983), and on the Greek text in the 1993 editions of the Greek New Testament (4th corrected ed.), published by the United Bible Societies (UBS), and Novum Testamentum Graece (27th ed.), edited by Nestle and Aland. The currently renewed respect among Old Testament scholars for the Masoretic text is reflected in the English Standard Version's attempt, wherever possible, to translate difficult Hebrew passages as they stand in the Masoretic text rather than resorting to emendations or to finding an alternative reading in the ancient versions.

In exceptional, difficult cases, the Dead Sea Scrolls, the Septuagint, the Samaritan Pentateuch, the Syriac Peshitta, the Latin Vulgate, and other sources were consulted to shed possible light on the text, or, if necessary, to support a divergence from the Masoretic text. Similarly, in a few difficult cases in the New Testament, the English Standard Version has followed a Greek text different from the text given preference in the UBS/Nestle-Aland 27th edition. In this regard the footnotes that accompany the English Standard Version text are an integral part of the English Standard Version translation, informing the reader of textual variations and difficulties and showing how these have been resolved by the English Standard Version translation team. In addition to this, the footnotes indicate significant alternative readings and occasionally provide an explanation for technical terms or for a difficult reading in the text. Throughout, the translation team has benefited greatly from the massive textual resources that have become readily available recently, from new insights into biblical laws and culture, and from current advances in Hebrew and Greek lexicography and grammatical understanding.

The translation is outstanding. The ESV achieves a new standard in accurate Bible translations for our day.

An excellent translation that can be trusted.

We have embraced the ESV as the preaching, teaching, reading and memorizing Bible at our church because, of all the translations I am aware of, it embodies the best balance of literal accuracy and contemporary English readability. I am deeply thankful to God for this translation of the Bible.

After twenty years of teaching God’s Word and changing translations I have found at last, by God’s grace, a translation that is easy to read and immensely accurate. The ESV is the new first choice for serious students and careful communicators of God’s unchanging Word.

Retaining the majesty of language with the clarity of thought, the English Standard Version is a grand accomplishment.

The ESV embodies both word-for-word exactness and easy readability. It has quickly become my primary Bible for both personal use and public teaching.

The ESV beautifully captures the richness of Scripture. Whether you're a veteran student, a new believer, or a first-time Bible reader, the ESV alleviates many of the linguistic hurdles to approaching Scripture. This is why I use the ESV for my personal study, for preaching, and why the WELL provides ESV Bibles to our attendees.

The ESV is what I’ve wanted for myself and my church for twenty-five years—one Bible we can all read, study, memorize, and give to our children.

I am so impressed with the clarity, beauty, and power of the ESV that I feel that I am reading the Bible again for the first time. From now on the ESV will be my Bible of choice. I simply don’t have the words to say how thankful I am for the ESV, its faithfulness to the original, and its beauty.

The ESV represents a new level of excellence in Bible translations—combining unquestionable accuracy in translation with a beautiful style of expression. It is faithful to the text, easy to understand, and a pleasure to read. This is a translation you can trust.

We use the English Standard Version as our church Bible because we are passionate about God’s Word—every last word of it—and because we want our children to have the best available translation for reading, teaching, preaching, memorizing, and serious Bible study.

I am delighted to express my great appreciation for the English Standard Version. As soon as I started using the ESV I realized what a treasure it is. I have recently adopted this as my preferred translation for personal Bible study and as the basis of the seminary courses that I teach. (I write this as someone who has been using [another translation] for the past twenty-five years—and as someone who never expected to make such a change.)

The ESV shows exactly what the original says—and with elegance of style! I welcome its publication with enthusiasm.

My ESV is now thoroughly marked and well worn. The translation safeguards essential accuracy while maintaining a style that is both fluid and beautiful.

Our preaching team chose the ESV for its accuracy and clarity and we are recommending it to the entire congregation.

I recommend the ESV as the best literal translation for Bible study in my hermeneutics class and in Bible study seminars. Congratulations on a job well done.

The ESV is a great word for word translation that is a tremendous gift to Bible students and teachers. I am thankful to my friends at Crossway for the investment they have made to the kingdom by giving us the ESV.

I have been preaching from the ESV for the last year and find it to be a powerful text, which accurately and beautifully communicates with this generation of believers.

With the myriad of new Bible translations on the market today, few stand out. The ESV is one of the few, and surpasses the others in its simple yet elegant style. In many respects the ESV has accomplished in the 21st century what the KJV accomplished in the 17th: a trustworthy, literary Bible that is suitable for daily reading, memorizing, and preaching.