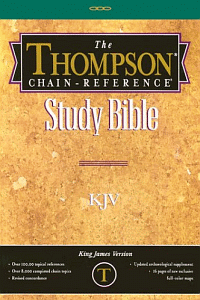 Early in his ministry as a Methodist Preacher, Dr. Frank Charles Thompson realized that the reference Bibles then on the market failed to present the Bible as it should be presented - in a clear, scholarly, interesting, yet simple and compact form. He saw the need for a well-organized reference Bible that would be of practical use to the layman as well as a minister.

He began his original research about 1890. After he completed the thought suggestions opposite the verses throughout the Bible, some of the men in his church saw his Bible and told him that this was what they needed to help them in their Bible study. They encouraged Dr. Thompson to have his Bible, with marginal references, published so that everyone could have the advantage of these helps in their Bible study.

Today the Thompson Chain Study System® offers you a complete study library in one volume! With over 78 practical features for in depth scriptural appreciation and understanding, nothing can match what the Thompson Chain Reference Bible® offers!

Dr. Frank Charles Thompson was born in 1858, in Elmira, New York. He was ordained into the Methodist ministry in 1879. While pastoring in Genesee, county, New York, he began to make extensive notes in his bible. Members of his church offered to help pay for the publication of the marginal notes. The original hand-written notes in the margins of Dr. Thompson's personal Bible are on display at Kirkbride Bible Company offices in Indianapolis, Indiana.

The first edition of the Thompson Chain-Reference Bible was published in 1908, by the Methodist's Book Concern of Dobbs Ferry, New York, and Thompson Chain rose to popularity by 1915. Now more than 11 million copies have been sold. In addition to his work with the chain-reference-bible, Dr. Thompson wrote two books: Bob's Hike to the Holy City, the Adventures of a Boy Scout and His Sister on the Hill Trail, in 1927 and Barriers to Eden, A Tale of Social Blockade, in 1939. Frank Charles Thompson died, in 1940.

Few Bible study helps have been as universally used as the Thompson Chain-Reference.

This is one of the most powerful, compact tools around. A good chain-reference Bible such as Thompson's will help you find every parallel passage on the same topic or even the same word or phrase every time it is used. A large topical numbered section in the back, plus a selective concordance, maps and charts help round out this excellent reference work.

I am grateful for the Thompson Chain-Reference Bible, because it offers the most complete set of cross references and marginal notes of any Bible I know. This will be invaluable tool for all serious students of the Bible.