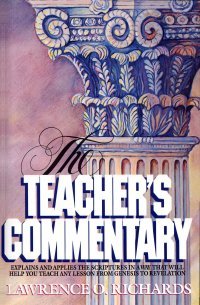 The Teacher's Commentary is specially designed for teachers of children as well as teachers of youth and adults, packed with "how to teach it ideas", and with insights into how the Scriptures touch the lives of people today. This is a commentary on the whole Bible that you will want to read for your personal enrichment and use every time you prepare to teach God's Word.

The Teacher's Commentary answers most questions a teacher might ask:

No greater need is imaginable than that of a commentary for teachers of the Bible in our Sunday schools. Dr. Larry Richards has prepared The Teacher's Commentary as a magnificent and succinct insight into the Scriptures. Get one for every teacher in your Sunday school.