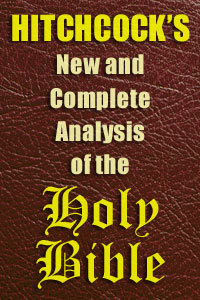 Originally published by Roswell Hitchcock in 1869, Hitchcock's New and Complete Analysis of the Holy Bible, breaks down the 31,173 verses in the Bible according to their meaning, and arranged into 27 Books, and these books are subdivided into 242 Chapters, containing 2,369 Sections. The arrangement of the subjects is natural and logical, and under its proper heading you will find that every verse in the Bible is cataloged along with every other verse related to the same subject. Thus the Bible becomes its own interpreter, and its teachings on subjects are easy to view.

Roswell Dwight Hitchcock was born at East Machias, Maine in 1817. Hitchcock graduated from Amherst in 1836, and, after a year or more spent in teaching, entered Andover theological seminary in 1838. He was a tutor at Amherst from 1839 till 1842, preached for a year at Waterville, Maine, and in 1845, was ordained pastor of the 1st Congregational church of Exeter, New Hampshire. Soon after this he spent a year in Germany, studying at the universities of Halle and Berlin.

In 1852 Dr. Hitchcock resigned his pastorate to accept the Collins professorship of natural and revealed religion in Bowdoin College, Brunswick, Maine, and three years later he was called to the professorship of church history in Union Theological Seminary, in New York city. He visited Italy and Greece in 1866, and Egypt, Sinai, and Palestine in1869. In 1871 he was elected president of the American Palestine Exploration Society, and in 1880 president of Union Theological Seminary, still continuing his lectures. Those on the Life of Christ and on Apostolic Church History were made extremely interesting from his personal acquaintance with the Holy Land.

He also proved himself, while president, to be an efficient man of business, and assured the success of the seminary from a financial point of view. Under his administration land was purchased in the upper part of New York city, and through his efforts new buildings were erected which were dedicated on 9 December, 1884. He received the degree of D. D. from Bowdoin College, and from the University of Edinburgh in 1885, and that of LL. D. from Williams in 1873, and from Harvard in 1886.

In 1880 Dr. Hitchcock was elected vice president of the American Geographical Society. He was also a trustee of Amherst college from 1869 until his death. He published numerous orations, addresses, and sermons, and contributed many articles to the religious press. From 1863 till 1870 he was one of the editors of the American Theological Review. He is the author of a Life of Edward Robinson, Complete Analysis of the Bible, Hymns and Songs for Social and Sabbath Worship, Carmina Sanctorum and numerous others. He translated and edited, with Dr. Francis Brown, The Teaching of the Twelve Apostles. Dr. Hitchcock passed away at Somerset, Massachusetts in 1887.