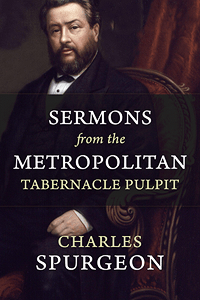 This collection of sermons from Charles Spurgeon not only features the 57 volume set of the Metropolitan Tabernacle Pulpit, original unabridged, unedited 57-volume sermon series stenographically recorded by his peerless and untiring private secretary, Mr. J. W. Harrald, but it also includes the six volumes of the New Park Street Pulpit. In total, this 63 volume set contains 3563 complete sermons, enough to preach one sermon a week for over 68 years.

In addition, we have created topical indexes to all the sermons, so that you can search also by topic. The vast sermon illustrations are also indexed by topic for easy access.

I have turned to Charles Spurgeon in these days for help, and I have not been disappointed. My purpose in this article is to show how Spurgeon's life and ministry can encourage pastors to keep on preaching through adversity.

Never have I read anywhere or in any literature anything that compares to the sermons of C. H. Spurgeon

I have read everything by Spurgeon I can get my hands on!

Translated as Mr. Spurgeon Sermons have been into nearly all of the languages of the world. Their popularity at home is a fact that admits no dispute, and needs no enforcement. The language is as homely, as pungent, and as felicitous in its appeal to the understanding of the people as ever it was. The subjects of many texts are handled by him in a manner that shows his complete mastery of the highest rhetorical art of exposition.

Charles Haddon Spurgeon, whose name is a household word the world over, is the most remarkable minister of Christ now living

Mr. Spurgeon was absolutely destitute of intellectual benevolence. If men saw as he did they were orthodox; if they saw things in some other way they were heterodox, pestilent and unfit to lead the minds of students or inquirers. Mr. Spurgeon's was a superlative egotism; not the shilly-shallying, timid, half-disguised egotism that cuts off its own head, but the full-grown, over-powering, sublime egotism that takes the chief seat as if by right. The only colors which Mr. Spurgeon recognized were black and white.

There was no one who could preach like my father. In inexhaustible variety, witty wisdom, vigorous proclamation, loving entreaty, and lucid teaching, with a multitude of other qualities, he must, at least in my opinion, ever be regarded as the prince of preachers.