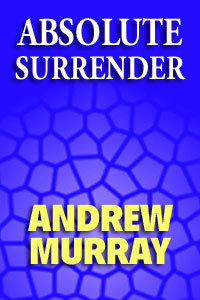 In this classic book, first published in 1895, Andrew Murray clearly and simply explains that if our hearts are willing to surrender everything into God's hands, there is no end to what He will do for us, and no end to the blessings that He will bestow upon us. This is just the beginning of Andrew Murray's counsel that will enable you to take a giant step closer to fellowship with God.

One of the top five books that have had the largest impact in my life.