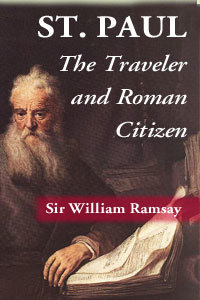 Sir William Mitchell Ramsay, was a critic of the Bible and was a supporter of the Tubingen theory, which caused him to conclude that the Book of Acts was produced in the mid second century A.D. While doing topographical studies in Asia Minor he was forced to examine the writings of Luke. Ramsey was astonished to discover that his archaeological findings confirmed the full accuracy of the customs, locations, and the governing titles Luke had mentioned; he then rejected the Tubingen theory and accepted a first century date of the writings of Luke. First published in 1895, St. Paul the Traveler and the Roman Citizen has been one of the most useful commentaries on the the Book of Acts. Ramsay made the point that Luke's references to 32 countries, 54 cities, and 9 islands within the book of Acts contains no mistakes.