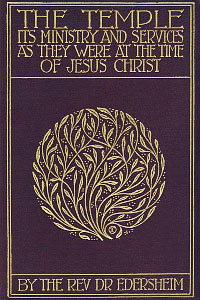 Look Inside
The Temple
Its Ministry and Services as They Were at the Time of Jesus Christ.
By: Alfred Edersheim (Author)
Publisher: Wordsearch
Category: History & Culture

First published in the 1880's, The Temple: Its Ministry and Services, This classic work focuses on the significance of the Temple in Jerusalem and it's importance to both Christians and Jews alike. Edersheim provides a thorough study of the physical appearance of the temple, its ordinances, and worshipers, the ministry of its priesthood, and the ritual of its services.

Some of Alfred Edersheim's most widely read works are: The Life and Times of Jesus the Messiah, Sketches of Jewish Social Life and Bible History Old Testament.

A singularly helpful work by a Christian Jewish scholar. Provides essential information pertaining to the Temple in the time of Christ.