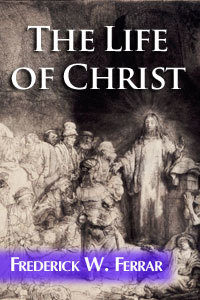 Farrar's extensive study of the four gospels, his knowledge of Greek and familiarity of the "holy lands" enable him to trace Christ's life from His birth in Bethlehem to His resurrection and ascension. Farrar writings are both vivid and reverent. His style appeals to the Bible scholar and but yet is applicable to any student of the Bible.

The book was originally published in 1874 as two volumes.

He was select preacher at Cambridge in 1868-69, 1872, 1874, and frequently afterward, honorary chaplain to the queen 1869-1873 and chaplain in ordinary after 1873, Hulsean Lecturer at Cambridge in 1870, and Bampton Lecturer at Oxford in 1885. In 1876 he was installed rector of St. Margaret, Westminster, and canon of Westminster; and in 1883 was appointed archdeacon of Westminster and rural dean of St. Margaret and St. John the Evangelist.

In 1890 he became chaplain to the House of Commons and in 1891 examining chaplain to the bishop of Worcester. In 1895 he was made dean of Canterbury. In all these positions he won distinction. As a teacher he had the admiration of his scholars, and as an ecclesiastic he discharged his duties with peculiar efficiency.

His sermons, though written hastily and marked by a somewhat exuberant eloquence, were listened to by thousands. His rare powers of advocacy were specially devoted to the improvement of public school education and the cause of total abstinence.

Farrar's publications were numerous and in varied fields. The earlier of them dealt with pedagogy and philology and included three famous stories of English school-life — Eric (1858), Julian Home (1859), and St. Winifred’s (1862). He prepared the commentary on Judges (1883) for Bishop Ellicott's commentary, Kings (1893-94) and Daniel (1895) for The Expositor’s Bible, Wisdom (1888) for H. Wace's commentary on the Apocrypha, and Luke (1880) and Hebrews (1883) for the Cambridge Bible for Schools and Colleges and for the Cambridge New Testament.

His Hulsean and Bampton Lectures were published under the titles respectively of The Witness of History to Christ (1871) and The History of Interpretation (1886). Of his many volumes of sermons the most important was Eternal Hope (1878), containing five discourses preached in Westminster Abbey in 1877.Herein and in Mercy and Judgment (1881) he defended the doctrine that though there may be for some an endless hell because they resist the grace of God beyond the grave, there is no hell of material fire, and for the great majority, through God's mercy and Christ's sacrifice, a complete purification and salvation.

A reverent treatment. The literacy excellence of this work, as well as its historic reliability, place this study only slightly behind Edersheim for overall value and reliability