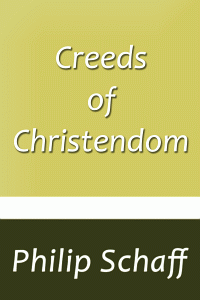 Creeds of Christendom - chronicles the history of the Creeds of the Christian Church from the New Testament era to the early 1900s. Published in three volumes they break down the credal history into three parts: The History of Creeds, the Greek and Latin Creeds and the Evangelical Protestant Creeds.

The following Creeds are discussed in detail:

(1819 –1893), was born in Chur, Switzerland, and was educated at the gymnasium of Stuttgart, and at the universities of Tübingen, Halle and Berlin. He then traveled through Italy and Sicily as tutor to Baron Krischer. In 1842 he was Privatdozent in the University of Berlin, and in 1843 he was called to Mercersburg, Pennsylvania, to teach church history and biblical literature, he was ordained as a minister of the Reformed Church in April 1844 and in July of that year arrived in the United States. For nineteen years he taught at Mercersburg Academy where he helped to develop the Mercersburg Theology, with its emphasis on the church and the sacraments. In 1863 he moved to New York City, where he became secretary of the New York Sabbath Committee, an organization opposed to the secularization of Sunday. In 1870 he joined the faculty of Union Theological Seminary in New York City, where he served until his death. His ecumenical interests were shown in his strong support of the Evangelical Alliance, of which he was the American secretary, and of the Alliance of Reformed Churches.

Describes the history of the creeds, and provides a critical appraisal of them. Includes the intrigue surrounding the framing of the creeds, the insights contained in the creeds and their influence on history.