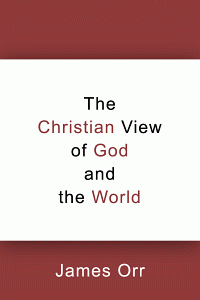 Look Inside
The Christian View of God and the World
By: James Orr (Author)
Publisher: Wordsearch
Category: Theology

James Orr was born in 1844 at Glasgow and spent his childhood in Manchester and Leeds. He was orphaned and became an apprentice bookbinder, but went on to enter Glasgow University in 1865. In 1870, he obtained an M.A. in Philosophy of Mind, and after graduating from the theological college of the Presbyterian Church, he was ordained a minister in Hawick. In 1885 he received a D.D. from Glasgow University, and in the early 1890s delivered a series of lectures that later became the influential The Christian View of God and the World. He was appointed professor of Church history in 1891 at the theological college of the United Presbyterian Church. He was one of the primary promoters of the union of the United Presbyterian Church with the Free Church of Scotland, and he represented the United Presbyterians in the unification talks. After they joined in 1900, he moved to Free Church College (now Trinity College), as professor of apologetics and theology. He lectured widely in both Britain and the United States.

Orr was a vocal critic of theological liberalism and helped establish Christian Fundamentalism. His lectures and writings upheld the doctrines of the virgin birth and resurrection of Jesus, and the infallibility of the bible. Orr did not agree with teachings of biblical inerrancy. He advocated a position which he called "theistic evolution", but which would today be called progressive creationism. Orr was the editor of the International Standard Bible Encyclopedia. He passed away in 1913.

In spite of its age, this work is still relevant and useful