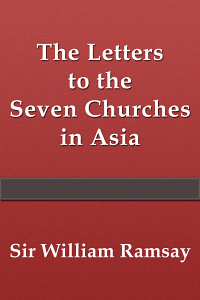 Look Inside
The Letters to the Seven Churches in Asia
By: William Mitchell Ramsay (Author)
Publisher: Wordsearch
Category: History & Culture

The Book of Revelation has long troubled Christians from all traditions. Letters to the Seven Churches in Asia offers a sound and accessible interpretation of the first three chapters of Revelation. In order to interpret the Apocalypse in its historical context, Sir William Ramsay presents a comprehensive background for the writing, transmission, and significance of letters among the seven Churches in Revelation: Ephesus, Sardis, Smyrna, Pergamos, Thyatira, Philadelphia and Laodicea.

A brilliant study of the historical and archeological material relating to these churches.