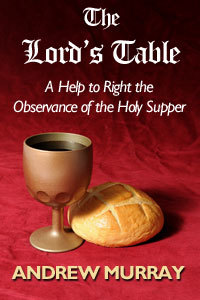 Look Inside
The Lord's Table
A Help to the Right Observance of the Holy Supper
By: Andrew Murray (Author)
Publisher: Wordsearch
Category: Literature, General

Designed to prepare the hearts and minds of communicants for effective, meaningful participation in the Lord's Supper.