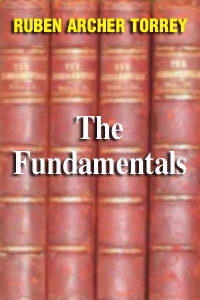 The Fundamentals combines over 100 articles in an authoritative defense against Liberalism of the Faith. Originally issued as a twelve volume set, over 300,000 copies of this work were originally distributed to missionaries, ministers and Christian works throughout the world.

These articles blend a "common-sense" doctrinal approach with personal application built upon the foundation of the inspired and inerrant Scriptures. "The Fundamentals" defends the deity of Christ, the inerrant Word of God, the bodily resurrection of Christ and many other foundational truths. These statements also apply biblical Christianity to the wider problems of life and culture by focusing on the essentials and de-emphasizing the non-essentials. The term "Fundamentalism" actually comes from this classic of Christian literature.

About the Editor
Ruben Archer Torrey was born in Hoboken, New Jersey in 1856. Torrey graduated from Yale University and Yale Divinity School and studied at the universities of Leipsic and Erlangen. He was pastor of the Congregational Church, Garretsville (1878-82); Open Door Church, Minneapolis (1883-86); superintendent of the Minneapolis City Missionary Society (1886-89); pastor of People's Church, Minneapolis (1887-89); superintendent of Chicago Evangelization Society and Moody Bible Institute (1889-1908), having meanwhile been pastor of the Chicago Avenue Church, Chicago (1894-1905).