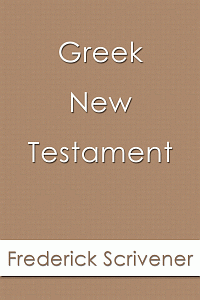 The Reverend Frederick Henry Ambrose Scrivener, LLd. (1813-1891), was an important text critic of the New Testament and a member of the English New Testament Revision Committee which produced the Revised Version of the Bible.

Graduating from Trinity College, Cambridge in 1835, Reverend Scrivener became a teacher of classics at a number of schools in southern England, and from 1846 to 1861 was headmaster of a school in Falmouth, Cornwall. In 1861 he was also made the rector of St. Gerrans in Cornwall where he served for the next 15 years.

Initially making a name for himself editing the Codex Bezae Cantabrigiensis, Reverend Scrivener also edited several editions of the New Testament. A Novum Testamentum Graecum, published in 1860 and a second edition in 1867 with the text of Stephanus, and the various readings of Beza, Lachmann, Tischendorf, Tregelles, and others now resides in the British Library. For Reverend Scrivener's services to textual criticism and the understanding of Biblical manuscripts, he was voted a Civil list pension from the English government in 1872. He was an advocate of the Textus Receptus over more modern manuscripts as a source for Bible translations.

In 1874, he became Prebendary of Exeter and vicar of Hendon, in London where he remained for the rest of his life.