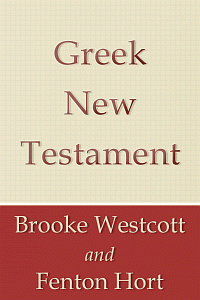 The New Testament in the Original Greek was first issued in two editions: the original two-volume edition, with the text itself in the first volume and an Introduction and Appendix of Notes on Select Readings in the second.The latter volume of the original edition was written by Dr. Hort, and in it he sets forth the arguments and general theories upon which the text was reconstructed, and provides explanations for many specific textual decisions.

For their translation Westcott and Hort employed the two oldest then-known manuscripts, Codex Vaticanus and Codex Sinaiticus, and they elevated their work to a pristine class called "Neutral,". The Neutral text is usually considered to be the best text and the most faithful in preserving the original. Characteristics of the Neutral text are brevity and austerity. That is, it is generally shorter than the text of other forms, and it does not exhibit the degree of grammatical and stylistic polishing that is characteristic of the Byzantine text. It needs to be stated clearly that the text of Westcott and Hort was not the first printed Greek Testament that deliberately and substantially departed from the Textus Receptus. Westcott and Hort were preceded in the late 1700s by Griesbach, and in the 1800s by Lachmann, Alford, Tregelles, and Tischendorf.

Whatever may be the merits of Westcott and Hort's theory, the success of their text was largely due to timing. In the 1860's the two most ancient copies, Codex Sinaiticus and Vaticanus, were both published for the first time, creating a public sensation. Westcott and Hort began work on their text, in 1870, the same year that the English Revised Version was commissioned by the church authorities in England. Westcott and Hort both served on the revision committee and were able to distribute to the members of the revision committee a draft copy of their text.For the next ten years, Westcott and Hort continually advocated their views in favor of the texts of Codex Sinaiticus and Vaticanus in regular meetings of the most influential scholars of Great Britain and America. New Testament in the Original Greek of Westcott and Hort was published in 1881, the same year that the English Revised Version appeared.