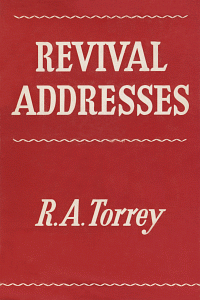 In these pages the words of the great evangelist - Ruben Archer Torrey - still resound his compelling appeal to all individuals to accept Christ as their personal Savior and Lord.

As Torry preached, thousands came forward to declare publicly their acceptance of Christ. He inspired people in Japan, China, Australia, Tasmania, New Zealand, India , England and Scotland with these messages. Here in their electronic form, they are continuing their soul-saving work.

From his experience in bringing before the world the message of Christ, he has stirring stories to tell of the victories of conversion and the tragedy of rejection. Always he returns to the simple but encompassing challenge: "Will you come to Jesus Christ - NOW?"