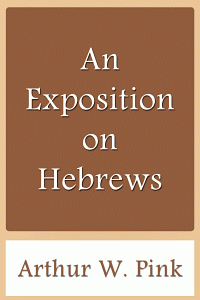 This is perhaps the most complete and thorough exposition of Hebrews available to the preacher, teacher, and Bible student. Passage by passage and verse by verse, A.W. Pink unfolds the rich teachings of the book, offering incisive commentary and providing a wealth of sermon material.

An Exposition of Hebrews is an essential resource for pastors, teachers, and Bible students looking to understanding the truths found in Hebrews. It is packed with sermon material as it illuminates passages on: