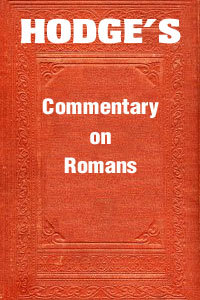 A Commentary on the Book of Romans, is one of the best known commentaries on the book by Charles Hodge. It was originally written in 1835, and published as a three-volume set, it is still as relevant today as it was then.

Hodge's method and matter make him doubly useful in commenting. He is singularly clear, and a great promoter of thought.