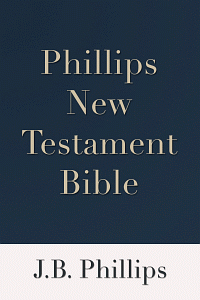 The New Testament in Modern English was born out of a perceived need by J.B. Phillips, to translate a Bible that would speak in a clear, readable way. Phillips felt the King James Version of the Bible was intelligible to young people and he decided to use modern language to communicate ancient truths. Schooled in classical Greek, Phillips translated the original Greek Text and rendered it into a thought-for-thought paraphrase of the New Testament.The The New Testament in Modern English was first published in 1958, it was later revised in 1961.

About the Author
John Bertram Phillips (1906-1982), was an English clergyman who had studied classical Greek at Cambridge University. Time Magazine described Phillips as "...he can make St. Paul sound as contemporary as the preacher down the street. Seeking to "transmit freshness and life across the centuries". Phillips work was undertaken primarily for the benefit of his Youth Club, and members of the his congregation, in a much bombed parish in S.E. London, during World War II. While ministering in bomb shelters with no tools to work with, apart from his own Greek Testament, he felt that since much of the New Testament was written to Christians in danger, it should be particularly appropriate to attempt a Bible translation that would convey the vitality and radiant faith as well as the courage of the early Church.

A suggestive and free modern paraphrase that brings to light many important shades of meaning found in the original. Makes good reading. Pastors will especially appreciate its originality.