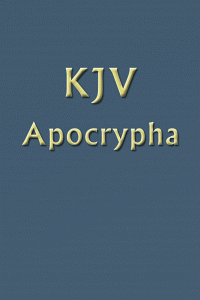 The King James Version, Apocrypha consists of 15 books added to the Old Testament by the Catholic church. The term "Apocrypha" means "hidden or concealed" from the Greek word apokruphos. In the fourth century, St. Jerome was the first to call the group of literature "Apocrypha", and included them in the Latin Vulgate.

While the Apocrypha has definite historical and cultural value covering the silent years between Malachi and the Gospel of Matthew, it was never referred to by anyone in the New Testament.

For commercial publishers, editions of the King James Version without the Apocrypha reduced the cost, while having increased market appeal to non-Anglican Protestant readers. With the rise of the Bible societies in 1827, most editions have omitted the whole section of Apocryphal books. The Apocrypha was excluded from most Bibles following a withdrawal of subsidies by the British and Foreign Bible Society in 1824, the society revised its position in 1966.