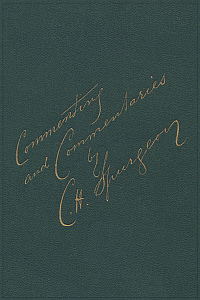 Commenting and Commentaries — Offers you a unique glimpse into the mind and thoughts of Charles Spurgeon on the subject of Bible Commentaries. This book which offers two lengthy lectures on the subject were originally released as part of Lectures to My Students. Spurgeon offers his opinions and thoughts about some of the Best Bible Commentators of his time in Lecture 1. In Lecture 2, Spurgeon discusses that value that commentary can offer to Scripture, especially when it helps to enlighten and illuminate the Bible text and meaning.

The very best of Mr. Spurgeon's work and the very best things that he says, are to be found in these lectures. We have read them with delight. They are full of weighty spiritual counsel, of common-sense, of humour. When the lecturer is addressing his audience upon the Holy Spirit in connection with our ministry, no one will find a sentence to excite a smile. The reader is borne down by a sense of grave spiritual realities. When we come to 'Open-Air Preaching' we have more common-sense in a page than many men exhibit in a lifetime, while the lectures on 'Position, Action, Gesture, &c.' with their illustrations, are brimful of humour.