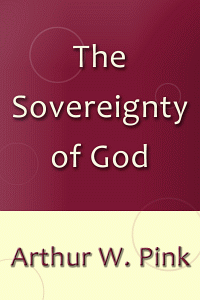 The Sovereignty of God was first published in 1918 and it was very controversial at that time. The reason for this is probably due to the fact that in Pink's day the doctrine of God's sovereignty was almost completely ignored, misunderstood or rejected. Why read or study a book on the doctrine of God's sovereignty? The author believed that this doctrine is the second most important doctrine taught in the Bible, the first being the Divine inspiration of the Bible. A right understanding of this doctrine places God on the throne where he belongs and under His blessing produces humility in His people.

Handles the intricacies of the doctrine with the skill of an accomplished theologian.