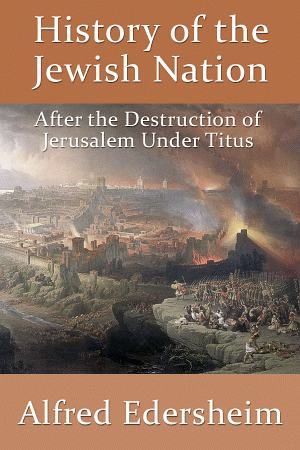 Look Inside
History of the Jewish Nation
After the Destruction of Jerusalem Under Titus
By: Alfred Edersheim (Author)
Publisher: Wordsearch
Category: History & Culture

An impartial historical account regarding the state of society, trade, commerce, agriculture, arts, science, theology etc. during the first centuries of the Christian era.

Some of Alfred Edersheim's most widely read works are: The Life and Times of Jesus the Messiah, Sketches of Jewish Social Life and The Temple: Its Ministry and Services.

This work remains a standard work on the history of the Jewish nation from the first to the nineteenth centuries. Of particular value for the light it throws on the gospels, the book of Acts, and subsequent church history.