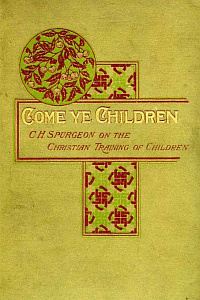 Come Ye Children Practical Help telling children about Jesus — A thankless task or a waste of time. Two ways people use to describe the Christian training of children. You don't have to feel that way!

In this book you will find encouragement, practical help, and Biblical principles by the "Prince of Preachers" Charles Spurgeon.

King David is used as an example to follow — David said "Come ye children, harken unto me: I will teach you the fear of the Lord" Spurgeon says "You are not ashamed to tread in the footsteps of David, are you?" Thus Spurgeon encourages the reader to imitate our Biblical fathers.

You will also go away with a new vision of the importance of the work in which you are involved. Spurgeon shows us that telling young people about Jesus is the most important task given to anyone, be they parent, teacher or youth leader.