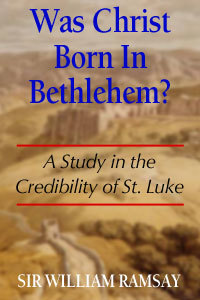 Look Inside
Was Christ Born in Bethlehem?
A Study in the Credibility of St. Luke
By: William Mitchell Ramsay
Publisher: Wordsearch
Category: History & Culture

Was Christ Born in Bethlehem? was written in 1898 and tackles the question of the location of Christ's birth and the historical facts that support the Biblical claim. Ramsey discusses in great detail the events chronicled in Luke's Gospel account and the corresponding archaeological proofs.

We Express our great satisfaction with the way in which the Professor has done his work, and work which hardly any one else could have done.

There is much interesting matter on allied topics in this learned and informing work, which will sustain Professor Ramsay's reputation as an accomplished and courageous scholar.

An interesting and instructive book, in which Professor Ramsay discusses with zeal and ability the historical trustworthiness of St. Luke.

The work is characterised by great earnestness as well as ability, while the learning which it displays is such as maybe expected from one who has long made the topics discussed matter of special study, for the pursuit of which he has also had special opportunities.