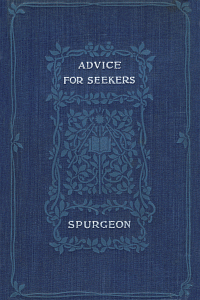 Advice for Seekers — typically people of the world have many false ideas and beliefs about what being a Christian is all about. These misconceptions frequently prevent seekers coming to Christ and fully trusting in him. The Prince of Preachers Charles Spurgeon details these misconceptions one-by-one and in the process helps not only seekers, but also Christians doubting their faith as well.