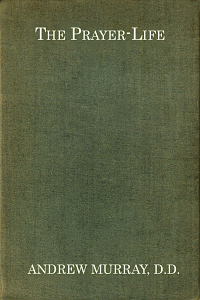 The Prayer Life is a self discovery into prayer as the key to spiritual blessing and victory over sin. Murray discusses the sin which all Christians struggle; the lack of a consistent prayer life. Murray illustrates this weakness and with incisive clarity, and then offers a step by step solution. His practical suggestions bring into perspective the struggle we all face, while providing an opportunity for each believer to make definite progress in his relationship with God.

All that this author writes is good