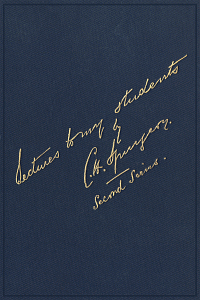 Lectures to My Students consists of many outstanding addresses by the great C. H. Spurgeon, delivered to the students of "The Pastors' College," (which he founded in 1856), of the Metropolitan Tabernacle.

This work consists of three volumes, the first two volumes featuring 23 lectures that focus on the different aspects of preaching a sermon, and the call to ministry. The third volume, better known as the Art of Illustration, discusses Illustrations and Anecdotes and how to weave them into a sermon.

Mr Spurgeon has selected topics of practical importance such as the call to the ministry, the preachers private prayer, sermon matter, the arrangement of the voice, impromptu speech, the choice of a text, and the like; and on each and all of the themes thus taken up he has much to say that is worth hearing, and he says it in a way that at once enlists the readers attention. Every point is illustrated in a forcible, homely style, and pulpit anecdotes of the most interesting character abound in these pages.

Truly admirable—pointed, hearty, practical, pithy, and full of good sense, while the spirit breathed is always that of manly piety and wise Christian zeal.

The very best of Mr. Spurgeon's work and the very best things that he says, are to be found in these lectures. We have read them with delight. They are full of weighty spiritual counsel, of common-sense, of humour. When the lecturer is addressing his audience upon the Holy Spirit in connection with our ministry, no one will find a sentence to excite a smile. The reader is borne down by a sense of grave spiritual realities. When we come to 'Open-Air Preaching' we have more common-sense in a page than many men exhibit in a lifetime, while the lectures on 'Position, Action, Gesture, &c.' with their illustrations, are brimful of humour.

This indispensable work covers every facet of the pastors life, including his calling, preparation for the ministry, visitation program, private and public prayer life, methods of preaching, use of illustrations and so on. Deserves careful reading once a year.