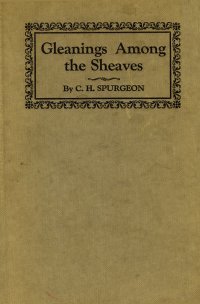 Gleaning Among the Sheaves — represents the best from the heart of Charles Spurgeon. Over one—hundred short devotional messages reveal Spurgeon's eloquence combined with his warm and colorful personal style. Typically, these selections touch the center of a Christian's faith, emotions, and hope.

Spurgeon was acclaimed by his contemporaries to be "the most impressive and permanently successful evangelistic preacher of his age. And the strong and growing popular demand for his writings in our times confirms the permanence of Spurgeon for every age.

Here are some of the topics:

These extracts are quite Spurgeonic—racy, rich, and rare, both as to style and matter—full of exquisite consolation—faithful advice—clear analogies—poetic touches—and glorious old gospel. We do not wonder though eight thousand copies were disposed of on the day of publication, and we trust eight times eighty thousand will find their way to the religious public"