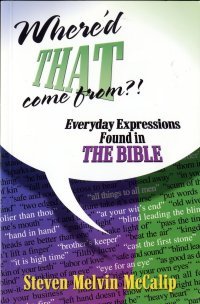 The English language is replete with idioms, sayings, and expressions of which a surprising number originate from or were made popular by the King James Version of the Bible. The words of this Bible translation have become imbedded in our common speech, yet we often speak biblical phrases daily without realizing we are quoting or alluding directly to the Bible. Some of the hundreds of examples that can be found in this work include:

In preparing this book, McCalip chose the sayings that he felt were most often used based on his personal experience and research. The expressions and common sayings listed in this book are all considered to be popular at one time or another by various authorities of English language studies. All Scripture quotations found in this book are from the King James Version.

A major portion of this work has been dedicated to explaining the biblical context of these phrases. Each popular expression is highlighted in the Scripture in which it is found, and each expression's biblical meaning (when not obvious) is discussed as well. The subject matter of the surrounding verses and the doctrines taught in those Scriptures are also often discussed. Helpful appendices contain less-detailed lists of biblical expressions from yesteryear along with lists of motion picture and popular music titles containing catchphrases from the Bible.

Steven Melvin McCalip was born in Houston, Texas in 1961, a seventh generation Texan. After receiving his bachelor's degree in political science at Baylor University in 1984, Steven soon afterward got his teaching certification from the University of Houston. Steven completed work on his master's degree in education at the University of Houston-Victoria and has taught English, Social Studies, and education courses both on the secondary and college levels.

Steven first began serious writing in 1999 after he believed the Lord directed him to do so. In 2001 his first book was published Where’d That Come From? Everyday Expressions from the Bible. He also has self-published four other books.