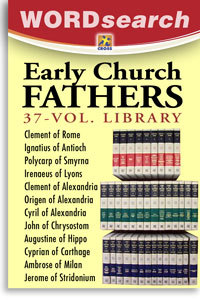 Ante-Nicene Fathers The Writings of the Fathers Down to A.D. 325

Volume 8. - Fathers of the Third and Fourth Centuries The Twelve Patriarchs, Excerpts and Epistles, The Clementia, Apocrypha, Decretals, Memoirs of Edessa and Syriac Documents, Remains of the First Ages

Volume 9. - Recently Discovered Additions to Early Christian Literature; Commentaries of Origen The Gospel of Peter, The Diatessaron of Tatian, The Apocalypse of Peter, The Visio Pauli, The Apocalypses of the Virgin and Sedrach, The Testament of Abraham, The Acts of Xanthippe and Polyxena, The Narrative of Zosimus, The Apology of Aristides, The Epistles of Clement (Complete Text), Origen's Commentary on John, Books I-X, Origen's Commentary on Matthew, Books I, II, and X-XIV

Volume 6. - Sermon on the Mount, Harmony of the Gospels, Homilies on the Gospels

Volume 9. - On the Priesthood, Ascetic Treatises, Select Homilies and Letters, Homilies on the Statutes

Volume 10. - Homilies on the Gospel of St. Matthew

Volume 11. - Homilies on the Acts of the Apostles and the Epistle to the Romans

Volume 13. - Homilies on the Epistles to the Galatians, Ephesians, Philippians, Colossians, Thessalonians, Timothy, Titus, and Philemon

Volume 14. - Homilies on the Gospel of St. John and the Epistle to the Hebrews

Philip Schaff (1819 –1893), was born in Chur, Switzerland, and was educated at the gymnasium of Stuttgart, and at the universities of Tübingen, Halle and Berlin. He then traveled through Italy and Sicily as tutor to Baron Krischer. In 1842 he was Privatdozent in the University of Berlin, and in 1843 he was called to Mercersburg, Pennsylvania, to teach church history and biblical literature, he was ordained as a minister of the Reformed Church in April 1844 and in July of that year arrived in the United States. For nineteen years he taught at Mercersburg Academy where he helped to develop the Mercersburg Theology, with its emphasis on the church and the sacraments. In 1863 he moved to New York City, where he became secretary of the New York Sabbath Committee, an organization opposed to the secularization of Sunday. In 1870 he joined the faculty of Union Theological Seminary in New York City, where he served until his death. His ecumenical interests were shown in his strong support of the Evangelical Alliance, of which he was the American secretary, and of the Alliance of Reformed Churches.