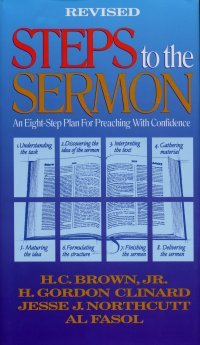 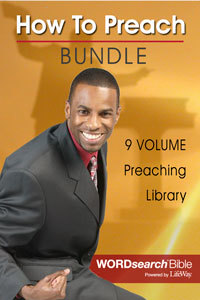 In the years since the original publication of Steps To The Sermon in 1963, audiences have become more sophisticated and preachers have learned to adjust their styles to reach today's media saturated mindset. Sermon styles have shifted from deductive to inductive. In view of these changes, Steps to the Sermon has been revised to help preachers communicate to the present generation. Readers of the first edition will be gratified to see that each of the basic "steps" have been updated for today's preacher.

Steps to the Sermon Revised is also an effective text for college and seminary level courses in preaching. Its step-by-step approach to sermon development, coupled with features such as chapter outlines and an extensive updated bibliography, make it a practical resource for experienced preachers.

H. Gordon Clinard was professor of preaching at Southwestern Baptist Theology Seminary form 1955-66. He graduated from Union University in Jackson, Tennessee. He received his B.B and Th.D. degrees from Southwestern Baptist Theological Seminary, where he taught homiletics for more than ten years. He also was distinguished Professor of religion at Hardin-Simmons University’s Logsdon School of Theology.

In 1944 Northcutt was elected as professor of preaching at Southwestern. In 1948 he was called to become pastor of the First Baptist Church in Abilene, Texas. The Abilene years were fruitful and the church prospered under his leadership. After a brief but highly successful pastorate in Abilene, he moved back to Fort Worth in 1950 to begin teaching theology.

Northcutt discovered, however, that he did not enjoy teaching theology as much as teaching homiletics. In 1951 he resumed his role of professor of preaching. Here Northcutt would make a major contribution to the strong tradition of Baptist preaching. During a teaching career spanning almost half a century, Northcutt taught more than 10,000 Baptist preachers.

Northcutt was elected dean of Southwestern Seminary's School of Theology in 1953 and continued in that administrative position for two decades. In 1973 the seminary was reorganized and he was elected vice president for academic affairs. In 1978 Northcutt returned to full-time teaching and was elected the E. Hermond Westmoreland Distinguished Professor of Preaching.

Southwestern recognized him as a distinguished alumnus in 1969. In addition to his academic work, Northcutt also was a member of the Rotary Club of Fort Worth and served as president in 1976-77. Northcutt died in Fort Worth in 1994 due to complications from Parkinson's disease.

Al Fasol is distinguished professor of preaching at Southwestern Baptist Theological Seminary in Fort Worth, Texas. He has taught at Southwestern since 1973. In 1961 Fasol pastored the Royalton First Baptist in Illinois and also served 18 months as interim pastor at Second Baptist Church in Little Rock, Arkansas. He graduated from Southern Illinois University and received his M.Div. and Th.d. from Southwestern Baptist Theological Seminary.