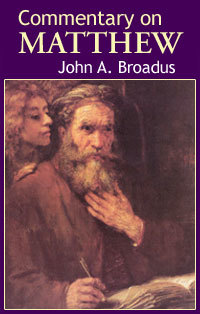 One of the finest volumes ever written on the Gospel of Matthew. A balanced, straightforward exegesis of the text. Also included is a wealth of practical insights which will provide the reader with a deeper understanding and application.

About the Author
John Albert Broadus was born in 1827 and was the fourth child of Major Edmund and Nancy Broadus, he came into a home which, though not wealthy, was distinguished by intelligence, culture, and piety. He was converted when he was about 16. His early education had been at home and in a private school. From 1844 to 1846 he taught in a small school and in the fall of 1846 Broadus entered the University of Virginia to prepare for the ministry. He received his M.A. degree in 1850 and during the year he taught in a private school in Virginia, preached in small country churches, and diligently studied church history, theology, sermons, and the Bible. During this year two notable events also occurred-his ordination and his marriage to Maria Harrison .

Calls of various kinds came to the young teacher, and he finally accepted the post as tutor in Latin and Greek at his alma mater and pastor of the Baptist church at Charlottesville. After one year he resigned his teaching position in order to devote full time to his pastorate. During his pasorate he took a leave of absence to serve as chaplain at the University of Virginia.

In 1858 Broadus was asked to become a member of the faculty of the new Southern Baptist Theological Seminary. Though he had a part in planning the institution, he declined the offer because of his attachment to preaching and pastoral work. After months of struggling with the decision, he agreed to become a member of the first faculty when the seminary opened in Greenville, South Carolina in 1859. For the next 36 years he was professor of New Testament interpretation and homiletics, and his life was inextricably bound to the school.

While the seminary was closed during the Civil War, Broadus preached in small churches and spent some time as chaplain in Lee's army in northern Virginia. When the seminary reopened in 1865, it struggled for existence and remained open largely because of the heroic efforts of Broadus and James Petigru Boyce (1827-88). However, during this period of stress and strain, Broadus did some of his best work. In 1870 he published On the Preparation and Delivery of Sermons, a book which has become a classic in its field.

The last years of Broadus' life brought increasing recognition. He published the following works: Lectures on the History of Preaching, Commentary on the Gospel of Matthew, Sermons and Addresses, Jesus of Nazareth, Harmony of the Gospels and twenty or more pamphlets, tracts, etc. In 1889 he delivered the "Beecher Lectures" at Yale Divinity School and is the only Southern Baptist ever to be accorded this honor. He died Mar. 16, 1895, almost at the zenith of his fame, and was buried in Cave Hill Cemetery in Louisville, Kentucky.

John A. Broadus commentary has survived the test of time, while other volumes in the American Commentary on the New Testament have been forgotten. Broadus was a careful scholar and a great teacher of preachers.

Dr. John A. Broadus, legendary founder of Southern Baptist Theological Seminary, was the commanding Baptist figure in 19th century America. His commentary on Matthew remains to this day as one of the best helps for pulpit preachers! I commend Wordsearch for making this classic available once again.

It has been my fortune to hear Beecher and Phillips Brooks, Maclaren, Joseph Parker and Spurgeon, John Hall and Moody, John Clifford and David Lloyd George. At his best and in a congenial atmosphere Broadus was the equal of any man I have ever heard.